The SAHGF Archive contains archival material related to both World Wars, Jewish life in Europe before the war, the Holocaust, and its aftermath.

Confronting the global threat of Nazism

Jews were especially targeted under vicious Aryan antisemitic doctrines which conceived ‘the Jew’ as the ultimate racial and ideological threat to the Reich.

By 1938, European war was imminent, as Hitler had presided over the takeover (‘anschluss’) of Austria and the invasion of Czechoslovia, and soon threatened to invade Poland. The Allied powers, including Great Britain and France, issued an ultimatum of war. German armed forces invaded Poland on 1 September 1939, and soon the world was at war.

The Second World War continued for six years, with battles taking place across Europe, North Africa, Asia and the South Pacific. This deadly war resulted in untold destruction, millions of deaths through battle and genocide, and ultimately created one of the largest refugee crises in history.

This article will explore efforts by Cape Town’s small Jewish community to respond to the plight of German Jews seeking refuge in South Africa, using the lens of the archive of papers and ephemera collected by the South African Holocaust and Genocide Foundation (SAHGF), and preserved in the holdings of UCT Libraries, Special Collections.

South African Jewry responds to the rise of Nazism

In response to the state sanctioned discrimination and violence being perpetrated in Germany, the South African Jewish community founded the South Africa Fund for German Jewry in May 1933.

At the time South Africa’s immigration policy towards Western European Jews was very lenient. All they had to do was produce a passport and a guarantee signed by ‘a South African citizen and deposited with the immigration authorities on their behalf to enter the country.’ Aided by this open door policy, the Fund set out to assist refugees with financial aid, help them find employment and accommodation. 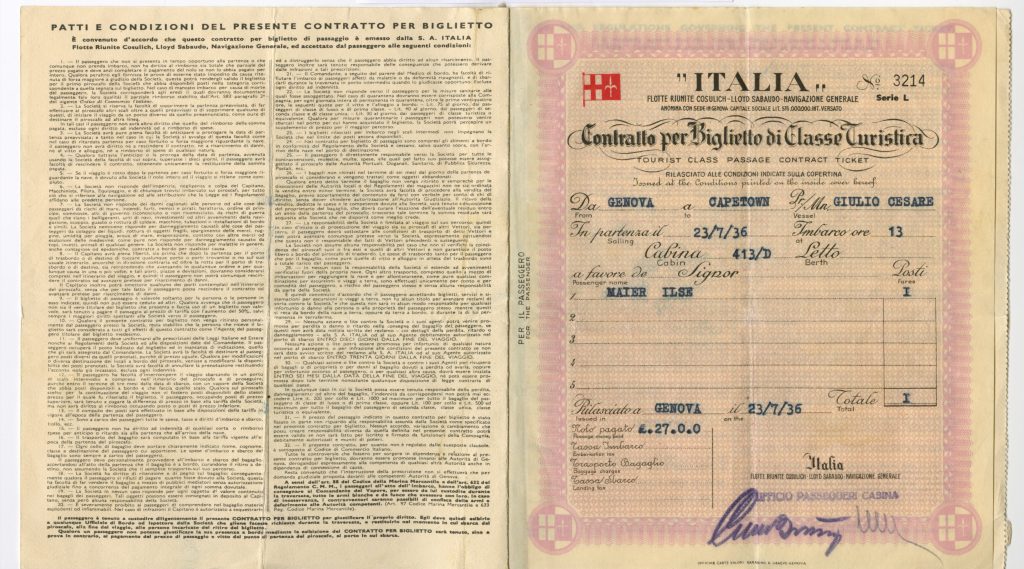 Furthermore it assisted them with any other difficulties they may encounter. The Fund also purchased a house, Rosecourt which functioned as its headquarters and as a meeting and educational space for the refugees.

In September 1936 the South African immigration authorities announced that from 1 November, each immigrant had to make a cash deposit of £100 pounds (about £17 000 in 2019) instead of producing a guarantee. At the time Jews were only allowed to take RM10 (about R15 in 2019) each out of Germany, thus the new law was a disaster for those who had sold all their possessions and obtained the necessary exit visas from the Nazi authorities.

To circumvent the new regulations, several German and overseas relief organisation came together to charter a special boat to transport 540 refugees with the necessary guarantees before the implementation of the new law. Thus the historic Stuttgart set sail on 8 October 1936 with five hundred and thirty seven passengers on board.

The leaders of the South African Jewish community had no idea that the boat was being chartered until all the arrangements were completed. Setting aside fears that the large influx of refugees may endanger future Jewish immigration, the community rallied to provide the new arrivals with assistance. The ship arrived three days before the new law took effect.

The 1926 cabin plan of the SS Stuttgart, later used as a Nazi cargo steamship. In 1943 it was bombed by the Allies and sunk near Gdynia, Poland (Artifacts Collection)

When the new immigrants arrived they were met by demonstrations by the Greyshirts, a South African far-right movement with Nazi sympathies. The passengers disembarked without incident. The local Jewish community provided some 200 refugees who remained in Cape Town with free board and lodging. The rest of the refugees moved to other parts of the country. As the Jewish-German refugees settled into their new home, they created several organisations to take care of the physical, cultural and spiritual needs of their fellow refugees.

The Jewish Community’s response to the War

Following the outbreak of war, the South African Jewish Board of Deputies (SAJBD) immediately pledged that the ‘Jewish community would do everything in its power to assist the Union and its allies in the fight for victory.’ (1) Along with the South African Jewish Ex-Service League and Jewish members of the Memorable Order of Tin Hats started conducting recruitment drives locally and nationally to encourage young Jewish men and women to join the Union Defense Forces. Their efforts were soon rewarded as scores of young Jewish men and women joined the UDF.

The Board also created the Executive Council which consisted of three special war committees: the War Service Council, The War Emergency Council and the Soldiers Assistance Council. These committees were tasked with caring for the spiritual, physical and cultural needs of the Jewish members of the Force as well as fundraising for war related costs. (2) By January 1943 about 8,366 Jewish men and 542 Jewish women had enlisted, of whom 2 200 had already seen active service outside the Union. By the end of the war 10 000 Jews had enlisted in the Union Defense Force and other Allied Forces. 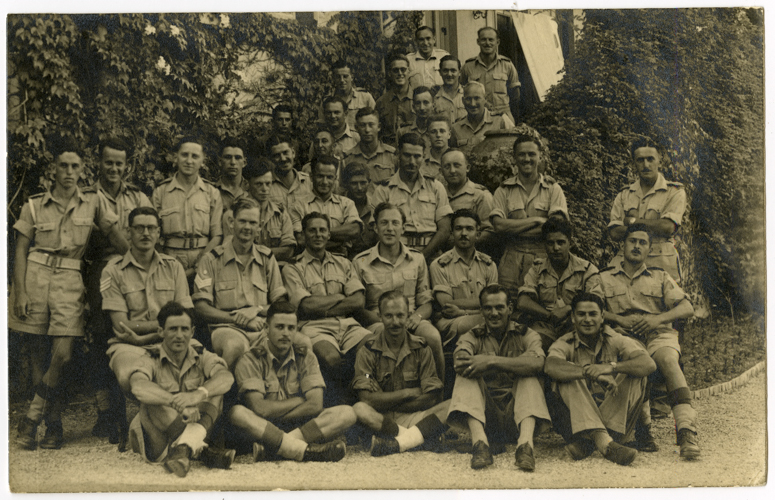 Of these 357 South African Jews were killed in action, 327 were wounded, 143 were mentioned in dispatches and 94 received awards.

The SAHGF Archive has over 60 discreet collections.  In commemoration of the 80th anniversary of the start of World War II, we have been collecting material related to Jewish men and women, who saw action during World War II for possible inclusion in an exhibition on the South African Jewish community’s contribution to the war effort, which will open in November 2020.

If you or your relative saw action during the war, please contact the Archive at: archives@holocaust.org.za or (021) 462 5553

(1) For more information on the German Jewish organisation please see: F. H. Sichel, From Refugee to Citizen: A sociological study of the immigrants from Hitler-Europe who settled in South Africa, A.A. Balkema, Cape Town, 1966