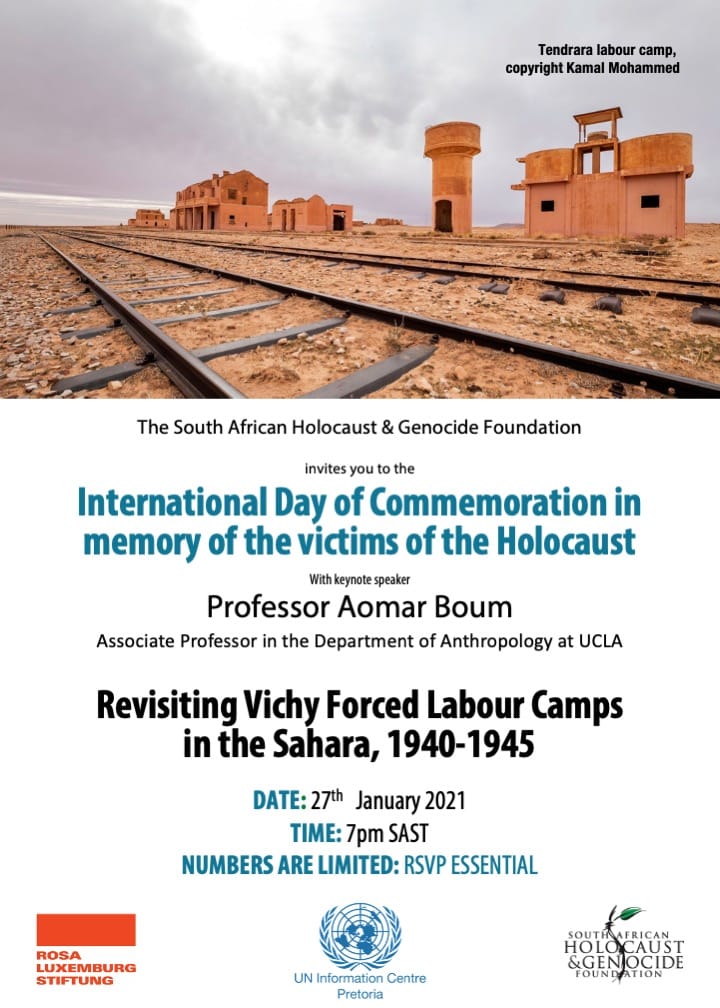 Join us on 27 January at 7pm (SAST) to mark the International Day of Commemoration in memory of the victims of the Holocaust with a keynote address from Professor Aomar Boum on “Revisiting Vichy Forced Labour Camps in the Sahara, 1940-1945“.

Since the end of World War II (WWII), historical and autobiographical works on Nazi camps throughout Europe have dominated Holocaust and genocide literature. Compared to Nazi history of detention and concentration camps, the relative historical amnesia and historiographical silence toward other camp experiences is largely reflected in the absence of broad historical studies that detail the complexities of camps established by other governments during WWII such as the United States, Japan, Italy, Spain and France.
Despite the growing historical interest in concentration and labour camps across the world today, the memory of WWII is finally becoming a regular topic of academic interest in a few North African and Middle Eastern academic circles. These intellectual conversations promise to break through the walls of taboo in societies where Jews and non-Jews were affected by colonial regulations.
–
Aomar Boum is an associate professor in the Department of Anthropology at the University of California, Los Angeles and faculty fellow at the Université Internationale de Rabat (Morocco). He is the author of ‘Memories of Absence: How Muslims Remember Jews in Morocco’ (2013), and co-editor of ‘The Holocaust and North Africa’ (2019) with Sarah A. Stein.
+ Google Calendar+ iCal Export