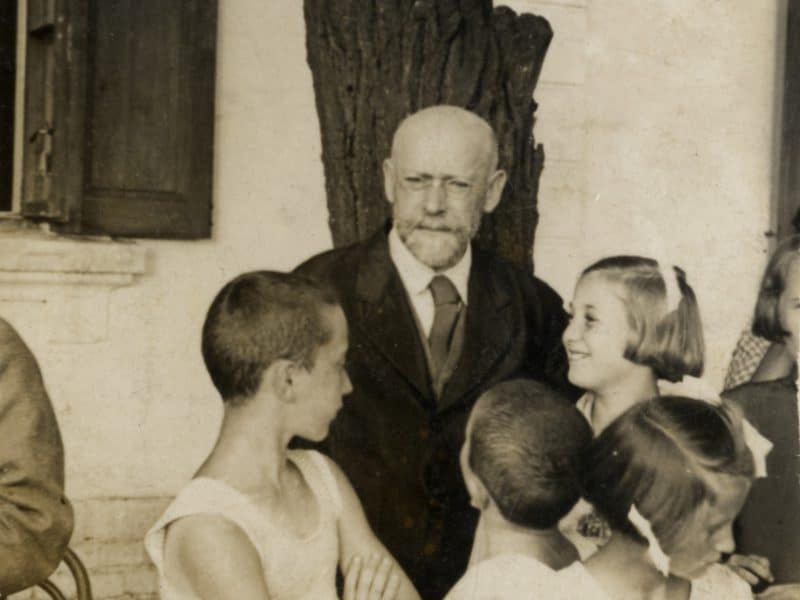 Korczak was born Henryk Goldszmit, on 22 July 1878 in Warsaw. He adopted the pen name Korczak aged 19 or 20, for use in his early playwriting career. The name came from a romance novel he liked; Józef Ignacy Kraszewski’s A History of Janasz Korczak. While he was a prolific writer in many genres, Korczak is best known internationally for his social work with orphaned children.

From 1912 until his death, Korczak devoted himself to caring for the orphans of Warsaw, operating out of a series of children’s homes which he either founded or contributed to. He ran these organisations like microcosmic democracies. The most famed of these was his Jewish orphanage, which was called Nasz Dom (Our House). Korczak used this alternate name as a replacement to the original: Dom Sierot (House of Orphans), as he felt it better communicated each child’s right to dignity. In Nasz Dom, children had their own parliament, newspaper and court, in which they debated transgressions against the school’s code and suitable penalties – although these were often governed by sympathetic understandings of each child’s background and complex inner world. In effect, Korczak was administering an education in natural justice and ethical psychology. He believed firmly in the full dignity of children and their need for love and respect.

Under Nazi occupation, Korczak was fired from the non-Jewish orphanage he was affiliated to. In 1940, he accompanied the children from Nasz Dom into the ghetto, where he continued to care for them and ensure their safety and relative comfort. In August 1942 all of the occupants of Korczak’s orphanage were told to report at the Umschlagplatz for deportation to Treblinka. Refusing to abandon the children entrusted into his care, despite numerous offers of rescue by non-Jewish Polish friends, colleagues and admirers, Korczak accompanied around 200 children to the death camp. All perished.

His bravery, courage and utter devotion to children serve as inspiration for educators – and, indeed to all adults – to this day.

“There are no children, there are people”