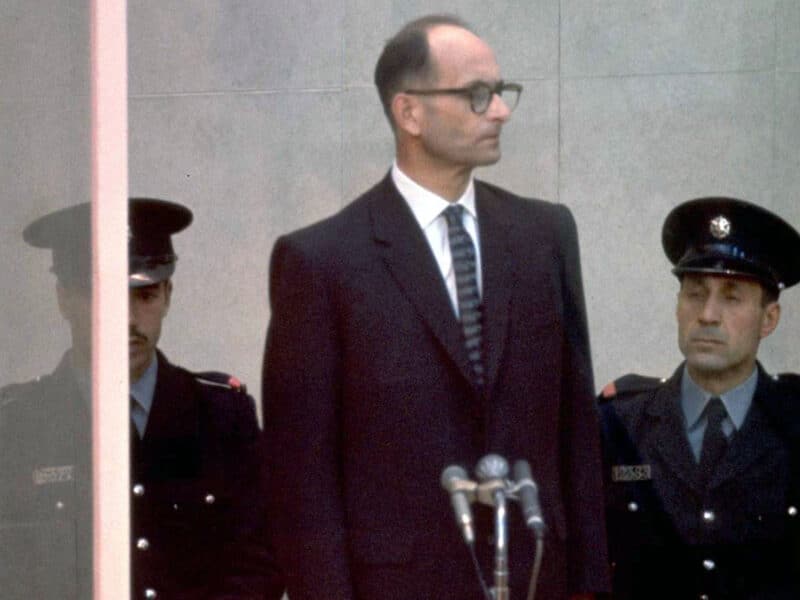 60 years ago, on the 15th of December 1961, Adolf Eichmann was sentenced to death in an historical trial in Jerusalem. Hannah Arendt, one of the most famous thinkers of the 20th century, was asked to write a report on the trial by the magazine the New Yorker, which went down in history as the “report on the banality of evil”, causing an outburst of outrage and heated, polemic debates. Why did her report upset so many people? And what can we learn from it, 60 years after the trial took place?

Debating the concept of banality 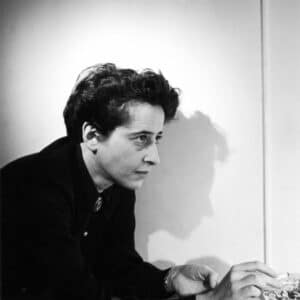 In her report, Arendt argued that Eichmann constitutes a new type of criminal: a functionary entirely lacking murderous instincts, organizing mass killings without ill intent, but simply because he was ordered to. Being confronted with a perpetrator who – contrary to the conventional understanding – was not a monster, but an ordinary man who thought he simply fulfilled his duty by obeying orders, she coined the term “banality of evil”, to explain the paradox between the apparent superficiality of a “perpetrator behind a working desk” and the monstrosity his actions lead to – genocide.

The terminology was however immediately misunderstood as downplaying the guilt of Eichmann, and the ‘banality of evil’ (which, again, implied the superficiality of some perpetrators’ lack of evil intentions) was confused with calling the evils committed, i.e. the crimes banal. What additionally sparked outrage was her negative assessment of the role Jewish Councils and Jewish leaders played in ghettos – a difficult topic deserving a blog on its own. Ultimately, her polemic and ironic style was perceived as arrogant and insensitive towards people who were still undergoing trauma, resulting in a lack of nuance and accuracy in her discussion about complex and contentious moral questions, obstructing the intended reception of her text.

After the controversy unfolded, Arendt tried to clarify some of her arguments in interviews. Reminiscent of the memoires she read by a German writer, she explained her choice of terminology the following way:

“Ernst Jünger came across some [German] peasants during the war. One peasant took in Russian prisoners of war directly from the camps, they were of course completely starved –

you know how Russian prisoners of war were treated here! And he says to Jünger: ‘They are subhuman, like beasts! You can see it: They are eating away the pig feed.’ Jünger remarks on this story: ‘Sometimes, it is as if the German people are driven by the devil!’ And he didn’t mean demonic. You see, this story has an outrageous stupidity. I mean, the story is kind of dumb. The [peasant] doesn’t see that these people are simply starving and that anyone would do that. […] And that’s really what I meant by banality. There is no depth. It isn’t demonic. It is simply the unwillingness to imagine what the other person is going through. […] What I wish to say is, when I say: ‘This isn’t a typical murderer,’ I don’t mean he’s any better. Rather, what I mean is that he is something indefinitely worse, even though he doesn’t actually have what we call ‘criminal instincts.’ […] And that was more than enough to make the worst crimes possible.”

The introduction of the concept of banality into the Holocaust discourse shapes our understanding of genocide to this day. Thus, it becomes tempting to view the Holocaust in dualistic terms: victims vs perpetrators, monstrosity vs banality, singularity vs universality. Whether one tends to side with one term or the other very much depends on the perspective one applies.

In the direct experience of a victim, it appears as if perpetrators can only be perceived as nothing but monstruous, because a victim tends to have a more individual (and therefore more narrow) view on their own victim-experience. As a result, the bureaucrats who are behind the implementation of a violent system tend to escape the field of vision, simply due to the bureaucrats not being present. Situating the ‘Final Solution’ in the context of antisemitism and hundreds of years of Jewish persecution, stressing the particularity of the Jewish victim experience, the Holocaust appears as a singular event demanding extraordinary measures to keep Jewry alive in the future.

Seen from the perspective of the perpetrators however, envisaging the whole perpetrator complex including those who ‘simply sign orders while not leaving their working desk’, banality becomes apparent. By understanding the mechanisms of perpetration, it becomes more plausible that similar mechanisms could be applied elsewhere, adding a universal element to the explanation.

Reading this, it also becomes much clearer why Arendt’s report incented so much outrage: the term ‘banality’ was not only misinterpreted, but also seemed to negate the whole victim-centered narrative which the prosecution in Israel tried to establish to legitimize the necessity for a Jewish national state – Israel.

This debate about how to conceptualize the Holocaust continues in academia up until this day between two schools or thought, the so-called functionalists and intentionalists. Intentionalists argue that the Holocaust was planned from the very beginning the NSDAP was established and narrate the Holocaust from the above stated victim-centered perspective, whereas the functionalists claim the Holocaust was the outcome of an internal struggle inside the NSDAP and not executed according to a blueprint which was certain from the beginning, but involved a considerable amount of improvisation before the NSDAP decided on the ‘Final Solution’. As the latter tend to include structural elements into their analysis, they also focus on universal aspects of the perpetrator complex.

Debating the form of the trial: documents vs witness testimony

Arendt also critized the form of the Eichmann-trial. She accused the main prosecutor Gideon Hausner of instrumentalizing the trial to write the history of Israel and consolidate the newly established society by relying heavily on witnesses telling their emotional and tragic story – often without any direct connection to Eichmann’s actions, containing elements of a Stalinist ‘show trial’. The reasoning behind her criticism was well summarized in ending speech of the movie “Hannah Arendt”:

“When the New Yorker sent me to report on the trial of Adolf Eichmann, I assumed that the court room had only one interest: to fulfill the demands of justice. This was not a simple task, because the court that tried Eichmann was confronted with a crime it could not find the law books. A criminal, who’s like was unknown in any court prior to the Nuremberg trials. But still, the court had to define Eichmann as a man on trial for his deeds. There was no system on trial, no history, no-ism, not even Antisemitism, but only a person.”

However, there are also scholars who criticize the Nuremberg trials for almost entirely using documents as base for the prosecution:

“As a consequence, the prosecution unfolded largely absent the testimony of witnesses, depriving the trial of an ‘affirmative human aspect’ and turning it into, to borrow Rebecca West’s memorable formulation, a ‘citadel of boredom.’ The failure of the prosecution to call more than a token number of victims, and the virtual absence of testimony from Jewish survivors, disappointed victims’ groups and eroded support for the trial within victim communities.”

In addition to the above stated conceptual difficulties concerning the understanding of the Holocaust, we are here caught between the dilemma of one person criticizing the excess of victim testimony, while another person argues that a lack of sufficient victim testimony undermines the historical and moral lessons which could be conveyed in a trial. How are we finally to assess all these contradictions?

Maybe it is easier to understand the latter dilemma if we discard the idea that there is a better and a worse form of trial, but rather come to conclusion that both forms have their advantages and disadvantages. As the Nuremberg Trials struggled to establish legitimacy [click here for blog on the Nuremberg Trials], the court decided it would be the most convincing strategy to convict the major war criminals with their own words or with documents that held their signature. Given the political climate in Germany right after the war, it was necessary to prevent groundless accusations claiming witnesses were fabricating evidence from being voiced to make the proceedings of the trial credible. Less emotional mobilization was the price which had to be paid in order to achieve that.

Israel however was confronted with different problems in the 1960’s. 25% of the population were victims and the youth didn’t seem to be too interested in the past of their parents. The first trial in history where Jews were able to hold their perpetrators accountable for what had been done to them therefore seemed like a legitimate opportunity to consolidate a common identity based on overcoming the perpetuality of victimhood. Whether one tends to support the idea that a courtroom can exceptionally be utilized in this manner partly depends on the moral standard one applies for the solution of pragmatic, political problems and on one’s stance towards the state of Israel itself.

Assessing the question of banality is a bit trickier. Today, we know that Eichmann was not only mindlessly executing orders, but was actively involved in organizing deportations, especially the deportation of Hungarian Jews a few months before the end of the war. That however doesn’t mean that this analysis cannot be applied to other perpetrators.

Today, research on the Holocaust tries to find a synthesis between the dichotomy mentioned above. The juxtaposition is overcome by acknowledging that both aspects exist simultaneously, as well as an ambiguous room between them: people being victims and perpetrators at the same time; the banality being monstrous; or the Holocaust having singular and universal aspects. Trying to fit an explanation into only one box at a time seldomly manages to adequately deal with the complexity we are confronted with when learning about genocide. In other words, studying history often means that we need to wrap our head around ideas that seems contradictory at the beginning, but turn out to be complementary pieces of the same thing. That can be challenging and sometimes a source of deep frustration. But it is a challenge we need to take up.


Deprecated: Function get_magic_quotes_gpc() is deprecated in /bitnami/wordpress/wp-content/themes/moose/framework/lib/eltd.functions.php on line 316