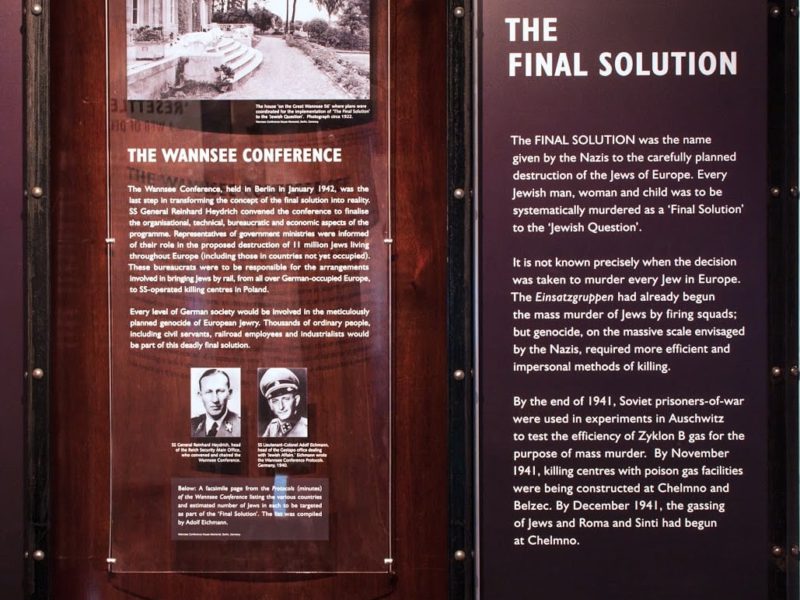 The Wannsee Conference, held in Berlin in January 1942, was the last step in transforming the concept of the “Final Solution” which was the codename for the annihilation of the Jews of Europe, into reality. SS General Reinhard Heydrich convened the conference to finalise the organisational, technical, bureaucratic and economic aspects of the programme.

The question of whether or not the “Final Solution” should take place was not discussed as most participants knew that mass murder through the actions of the Einsatzgruppen was already underway in the German occupied areas of the Soviet Union and Serbia. No objections were voiced regarding the “Final Solution” with all representatives of government ministries being informed of their role in the proposed destruction of 11 million Jews living throughout Europe (including those in countries not yet occupied).

These bureaucrats were to be responsible for the arrangements involved in bringing Jews by rail, from all over German-occupied Europe, to SS-operated killing centres in Poland.

Every level of German society would be involved in the meticulously planned genocide of European Jewry. Thousands of ordinary people, including civil servants, railroad employees and industrialists would be part of this deadly “final solution”.