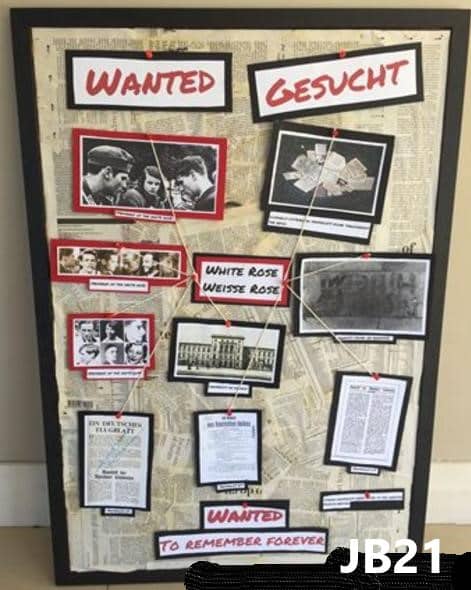 The White Rose movement was one of many resistance groups that fought against Nazi Germany. What they were doing was illegal at the time and punishable by death , which unfortunately was the fate of many of the members . The group wrote, printed and distributed pamphlets in the greater Munich region . These pamphlets denounced the Nazi regime’s crimes and oppression , and called for resistance. In their second leaflet, they openly denounced the persecution and mass murder of the Jews. As well as being distributed all over Munich, secret carriers brought copies of these pamphlets to other cities, mostly in the southern parts of Germany. In total, the White Rose authored six leaflets , which were multiplied and spread, to a total of about 15,000 copies. They were left in phone books in public telephone booths, mailed to professors and students, and taken by courier to other universities for distribution. The fifth leaflet was called “Aufruf an alle Deutsche!” (“Appeal to all Germans!”). 6,000-9 ,000 copies were made and they appeared in Saarbrucken, Stuttgart, Cologne, Vienna, Freiburg, Chemnitz, Hamburg, Innsbruck and Berlin. In the fifth leaflet, the name of the group was changed from White Rose to “German Resistance Movement”. On the 3rd, 8th, and 15 of February 1943, Alexander Schmorell , Hans Scholl, and Willi Graf (members of this movement) used tin stencils to write slogans like “Down with Hitler” and “Freedom ” on the walls of the university and other buildings in Munich .

During the rule of Hitler and the Nazis, the White Rose movement members were WANTED for their alleged crimes of resistance. Today however, they are WANTED in a very different way. We WANT them to forever be remembered as the heroes that they were. They risked and sacrificed their lives in their attempts to resist Nazi rule and bring about awareness of the cruelties and atrocities being perpetuated by the Nazi regime. May they always be remembered and may their memories forever be a blessing for the Jewish people.